What Signals Has the New Company Profile of Uniontech Revealed?

With the improvement of industrial technology, the increasing market demand and the support of national policies, 3D printing has now formed a complete industry chain, including various raw materials in the upstream, 3D printing equipment and services in the midstream, as well as many downstream application fields such as aerospace, automobile, medical treatment, education, etc.

After more than 30 years development, 3D printing industry has entered the stage of rapid growth from the introduction stage, and China has also been considered as the largest potential market by the industry.

According to the report of Wohlers, based on China’s occupying roughly 10% of the world’s 3D printing market shares, China’s 3D printing market capacity was about RMB 2.8 billion in 2014, and was expected to grow to about RMB 15 billion by 2018, with the CAGR of 66.3%, the growth potential of which was really huge. By 2020, the market size is expected to reach RMB 30 to 45 RMB billion.

Although China is a late starter in 3D printing, it has the world’s largest potential market for 3D printing. In the future, China’s 3D printing market is expected to grow faster than the global level. UnionTech, founded in 2000, is one of the first enterprises in China that were engaged in the applications of 3D printing technology, and it has participated in and witnessed the major development process of China’s 3D printing industry.

UnionTech has also combed the Company’s 20 years’ glorious development history at the time of the release of its new company profile recently. From the new company profile, it can be seen that UnionTech, as a leading enterprise in the 3D printing industry, has been continuously strengthening the degree of specialization in the process of continuous iteration of its technology. Meanwhile, in the era of “user is king”, UnionTech firmly grasps the market development trend and is always oriented to customer demands. It is committed to ecological integration, crossing boundaries with capital to maximize the value, enabling empowerment with knowledge to cultivate talents and create sustained momentum for the enterprise, opening market boundaries to break through the original industry ceiling, and constantly connecting partners to achieve synergy and symbiosis, so as to create a highly open synergistic and symbiotic business format and finally achieve win-win development.

UnionTech launched the RS series of SLA 3D printers in 2000. It is also the first domestic enterprise to apply SLA 3D printing on the industrial market. By virtue of its years of accumulated industry application experience, it has made continuous upgrading and updating of technologies and products, successively conducted layout in the vertical application markets of oral cavity, education and footwear, and launched corresponding professional 3D printing equipment. In 2017, it successfully developed and marketed the world’s first dual-laser SLA 3D printing equipment applied to the footwear industry.

The new company profile of UnionTech also signifies that the Company is moving towards a new starting point and will re-create a new peak of development.

Pioneer of the “scale customization+ distributed manufacturing” of 3D printing

The current market of 3D printing technology and related markets are entering a period of rapid development.

Recently, Ping An Securities released A Special Report on the Intelligent Manufacturing Industry - A Full Review of the 3D Printing Industry Chain: Opportunities and Challenges of the High-growth Track, showing that the global and domestic 3D printing industries reached US$9.68 billion and $2.36 billion respectively in 2018, and the compound growth rate in the five years reached 26.1% and 49.1% respectively. It is expected to continue to grow rapidly in the coming years.

With the positive development of the trend and the promotion of 3D printing in the Asia-Pacific region in the future, Asia is expected to become the region with the fastest growth of 3D printing demand. The global 3D printing market is expected to grow at a CAGR of 22.3% over the next five years to reach $28.9 billion by 2020, according to IDC.

It can be said that 3D printing is about to usher in its highlight moment.

Furthermore, UnionTech is positioned on the basis of 3D digital manufacturing technology to create user value and improve user experience through 3D printing technology. It is committed to building connections between “distributed manufacturing” and “scale customization” for users in multiple industries. Through the continued integration, creation and evolution of new business models, UnionTech will bring about changes to the 3D printing industry, manufacturing industry and even people’s lifestyles.

At the same time, UnionTech is always oriented by customer demands, and follows the customer’s differentiated demand to customize corresponding R&D strategies, so as to provide customers with integrated solutions of professional 3D printing technologies and high-quality pre-sales and after-sales services. At present, UnionTech products have been widely used in a number of applications and industries, and covered many aspects of industrial manufacturing and consumer goods production.

Among them, UnionTech has been one of the first 3D printing equipment manufacturers in the world to connect with the shoe mold industry since it entered the footwear market in 2003. In 2014, it began to establish a long-term and stable partnership with the internationally famous footwear brand Adidas and the world’s largest footwear manufacturer Pou Chen Group, and rapidly boosted the “FM” (Footwear Manufacture) series of 3D printing mass production equipment specially for the footwear industry and the supporting software, as well as the cloud system platform, so as to provide integrated solutions for the footwear industry in all application directions such as viewing the sampling mold, trying on the mold, manufacturing and casting.

In addition, by virtue of its leading market share, UnionTech has also been active in the light industry, health industry, education industry, cultural & creative industry and other industries. With its comprehensive development of application fields, the demand is anticipated to usher in a growth spurt.

The twenty years technology accumulation has provided a stronger service capability for UnionTech in the future.

UnionTech, which focuses on offering 3D printing services to customers, can provide “one-stop service” (from equipment, services to materials) for customers in multiple industries, comprehensively meet customer demands, provide customers with targeted overall solutions, and create a distributed manufacturing platform based on personalized customization demands, which has attracted a great deal of high-viscosity customer groups and been conducive to maintaining the first-mover advantage for sustainable development. 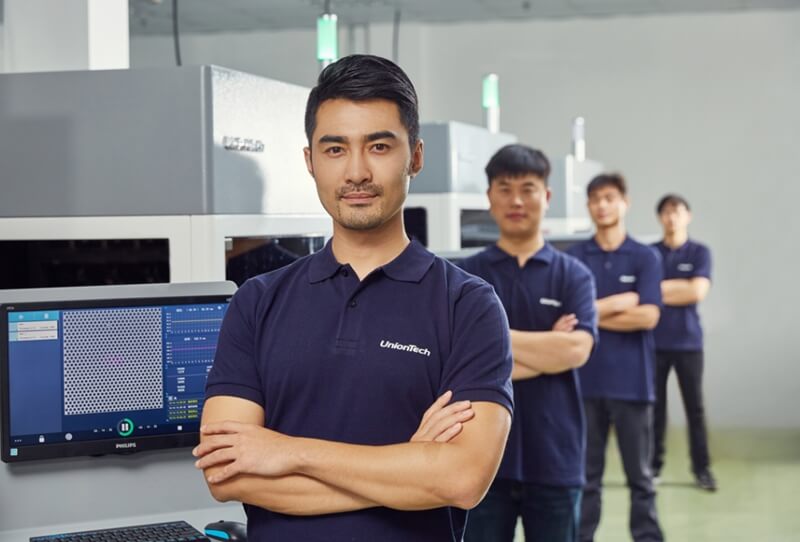 The future development theme of UnionTech is: “connection, synergy and symbiosis”.

Previously, MA Jinsong, general manager of UnionTech, mentioned that today’s situation is complex and fast-changing; but what is uncertain is the environment and certain is ourselves; we should return to the original aspiration and focus on the main channel.

Next, UnionTech should actively build a learning-oriented and knowledge-based organizational system, and promote the development of core capabilities from simple product supply to empowerment of customer value. UnionTech will conduct a new understanding, excavation and integration of the value chain of the industry, connect all partners to achieve synergy and symbiosis, and be committed to the ecological integration and win-win development of the industry.

In terms of the technology, just as the main channel that MA Jinsong mentioned, the SLA technology that UnionTech focuses on is supreme in the industry; and it also provides core support and builds a solid competitive barrier for UnionTech.

In terms of platform building, UnionTech has targeted the differentiated application of scenarios to exert online and offline force simultaneously. It has established the 3D data cloud platform and combined with the offline business to promote the ecological development of 3D printing.

Finally, in terms of the innovation of business model, UnionTech has been at the forefront of the market.

Based on 3D digital manufacturing technology and oriented by market demands, UnionTech further grasps the demands of market segments and focuses on the integration and application of technical resources to carry out a large number of application-oriented technology researches, create user value and improve user experience through 3D printing technology, and drive technology application through the market. It is committed to building connections between “distributed manufacturing” and “scale customization” for users in multiple industries and the continued integration, creation and evolution of new business models.

Since its establishment in 2000, UnionTech has always maintained its leading edge in 3D printing solutions, been a pioneer in 3D printing field, and helped all the industries realize technological innovation and mode transformation.

At the same time, UnionTech’s new globalization strategy has also been started off officially. Headquartered in Shanghai, UnionTech is building a global sales network with the rigorous attitude and study spirit of “Made in China”. At present, it has set up overseas branches and offices in Germany, Russia, Vietnam and other countries and regions.

Since 2012, UnionTech has achieved seven consecutive years of rapid growth with an average annual growth rate of about 70%, growing from a small enterprise with about 20 employees to a company with annual operating revenue of RMB 300 million.

PREV: You Are Invited: Wednesday Webinar from Uniontech on Stereolithography Technology Development & Application