Affected by the pandemic, the 3D printing industry has encountered difficulties in market development this year, which has led to a slowdown in the development of new products for many companies. Under such a situation, UnionTech released three new breakthrough products at the same time, which undoubtedly brought more confidence to the industry and demonstrated its strong technical strength.

On the occasion of the 20th anniversary of UnionTech, the past development history of UnionTech can be divided into three stages:

In 2000, UnionTech officially entered the 3D printing market with its own UV curing 3D printer. At that time, China's 3D printing industry was in a difficult starting stage, the business prospects were uncertain, and the technical field was even blank. Most of the companies that entered this field during the same period have a university laboratory background and have inherent advantages in scientific research strength, talent training and resource acquisition. Compared with them, UnionTech in the initial stage is undoubtedly in a disadvantageous position.

Around 2008, affected by the financial crisis, the development of various industries around the world was hit seriously, and the market awareness of 3D printing technology was not high, and the high-value 3D printing equipment was difficult to be accepted by customers.

Therefore, Ma Jinsong, General Manager of UnionTech, more clearly realizes that product technical strength is related to the company's foundation and determines how far the company can go in the future. As a result, he reformed UnionTech's organizational structure, changing the company from an inverted pyramid structure where the number of sales people is greater than the number of technology research and development personnel, to a pyramid structure where the technology research and development team dominates, and resources are more inclined to the back-end product technology department. In addition, UnionTech's emphasis on product technology is not limited to the preliminary research and development, but includes customer research and after-sales service. At the time when China's 3D printing industry was still immature, UnionTech was one of the few companies that had its own after-sales technical support team, and established a good reputation for itself through client-side services. This customer-oriented approach is persisted in subsequent product development. 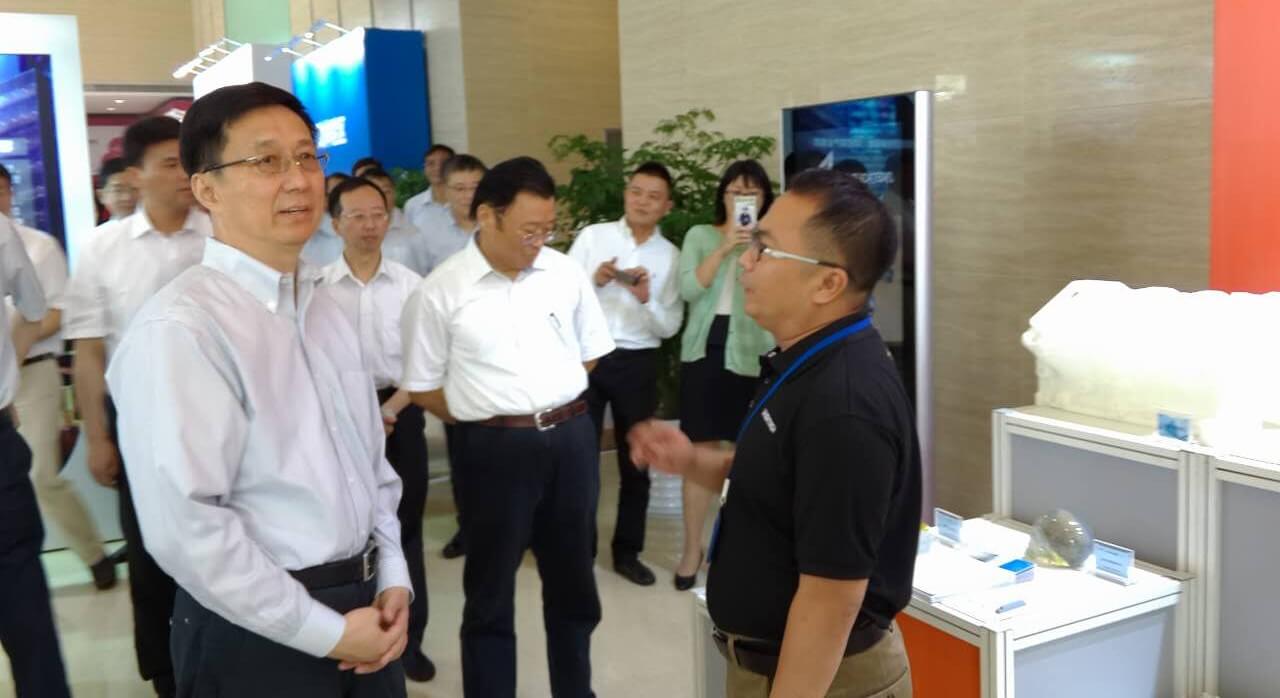 In August 2015, Han Zheng, member of the Political Bureau of the Central Committee and Secretary of the Shanghai Municipal Party Committee at that time, exchanged ideas on the development of 3D printing technology with Ma Jinsong, general manager of UnionTech.

After the initial establishment and consolidation, UnionTech started to usher in a major explosion of product technology. At this stage, UnionTech began to exert its efforts in two aspects at the same time: on the one hand, it is aimed at 3D printing technology itself, constantly breaking through difficulties, and improving technology; on the other hand, it is to identify the product system for different market segments, to be more closely connected with the application side, and to conduct product development based on application scenarios. In both aspects, UnionTech has achieved remarkable results.

With continuous breakthroughs in 3D printing technology itself, application development has become the key to opening up the market, UnionTech has keenly captured this point. In addition to the relatively mature prototype factory industry that has been developed in the early stage, it has carried out in-depth vertical research and development aimed at the shoe industry and dental dentistry, and has successively launched the bottom projection DLP 3D printer DeX60 and EvoDent series 3D printers for dental dentistry, FM series, FL series and FS series soft try-on equipment used in the shoe industry.

Taking the shoe industry as an example, UnionTech introduced digital texture technology into the equipment, using software to directly convert the pattern map bit image into a skin texture and affixed to the 3D data of the product, and then printed the pattern texture together with the entire product. Compared with traditional chemical corrosion texture, digital texture has the characteristics of high precision, good surface quality of the finished product, green environmental protection, and the production process is shorter, which greatly reduces the production cost. Such technical functions that are closely aligned with customer needs make UnionTech’s industry solutions more professional.

It is understood that in the year of 2018 and 2019, UnionTech's R&D investment exceeded 40 million RMB. Currently, UnionTech’s R&D center and technical support center have more than 70 employees, accounting for about 35% of the company’s total headcount.

UnionTech is constantly improving the company's R&D team structure. It promotes product upgrades and iterations on the production and application through collaboration between departments. For example, the process department puts forward technical requirements and market feedback to the R&D team, and standardizes the equipment process through the machine debugging process package, and improves the accuracy and quality of the product. The R&D team will input technical strength to the technical support team, and solve the difficulties in the process of customer use. This kind of customer demand-oriented back-office department linkage keeps UnionTech to always maintain the vitality of technological innovation.

In addition, UnionTech has 120 Chinese patents, 8 international patents, and 11 computer software copyrights; it has undertaken 4 district-level technology projects and 6 municipal-level technology projects. In terms of contribution to the industry, UnionTech established a 3D printing technology training center in 2015, which has trained more than 1,000 qualified technical personnel for the 3D printing industry; in 2017, it was awarded the stereolithography 3D printer alliance standard pilot enterprise, and took the lead in drafting the Stereolithography 3D printer Group standards.

UnionTech has set its future development theme as "connection, collaboration, symbiosis". New industry breakthroughs will occur in industrial cooperation, and the technological innovation capabilities that UnionTech has accumulated over the past two decades will surely help it overcome difficulties in its new journey.

PREV: They Have Been with Uniontech for 20 Years


NEXT: One of China’s Am Pioneers